4 EICs in one Summer!! THANK YOU EVERYONE!!

It's me Maza (Okasanjanai)
Hope all of you are doing well in your dialy life.
I am doing good here in Osaka.

Autumn is around the corner but there are many things happened in the month of August (EIC month!). 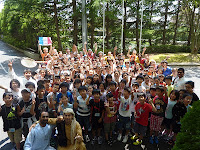 In GNT (Global Network Team) office, for the first time we held 4 EICs in one summer! It was tough yet satisfying because we were able to provide an opportunity for 329 children to experience EIC!

This time is a new challenge for GNT who welcome students in their 3rd grade of elementary school too. And Kumon students who are doing English worksheet level G2 to H2.

In addition camp leaders who joined this year EIC came from all regions of the world; Asia (South, East & S.E Asia), Europe, Middle East, America and Latin America. There were 2 groups of camp leaders; one group from Kansai region and another from APU, Oita. All together 64 camp leaders could experience EIC! From GNT's members KOKKORO...A VERY BIG THANK YOU Camp Leaders.

Also we have Hana Ikeda, who joined EIC in 2003 & 2004, took part in this year EIC as volunteer camp staff. Hana who is studying in Waseda University right now, became one of the good role model and inspiration for the children and one of the EIC participant wrote in her ‘My Dream’ poster that she wanted to be like Hana. KEEP IT UP HANA!

So if you are anywhere in Europe contact her on fb.

Thank you Tarta for the role you played and your valuable contributions towards the development and growth of EIC, CLs for the past years and always caring for the children. From our KOKKORO.... Kopkunkrap :)

Tarta we all missed you and we wish you all the best in your study and future undertakings.

There were also Olympics and Paralympics. Did you watch? I was so impressed especially by the paralympics who showed such determination in their facial expression. They reminds me of our own potential. Each of us has our own specialty just like them. Just that they needed support and they never give up So everyone let's give our support to EIC Family members and people around the world where ever we are...

Posted by EIC_Family at 5:44 PM No comments:

The Aim of English Immersion Camp

We have to respect other members of EIC family, when writing messages. 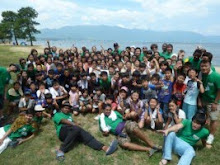 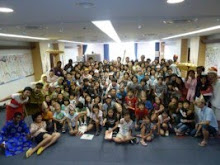